Reasons:
1. Unfair public treatment by Chairperson
2. Dysfunctional organisation and lack of communication with Chairperson
3. Unable to work collaboratively with Chairperson
4. Feeling undervalued in my current role by Chairperson
5. My values are no longer align with Chairperson's vision, mission and objectives
In the Zoom special meeting on 16 Aug 2020 with the Committee members and the Advisors on my resignation issue there were many "untrue statements" in such "an unfair meeting conduct" and the meeting recording has not been received until now as promised.
I resigned from the committee but still stayed as a member, however the Chairperson still marginalised me in the membership:
1. Not allowing me to join the Defense School cultural performance on 6 Nov 2020 considering all my contributions and dedications to KMA Inc since my involvement. This became unfair since other members were included.
2. Not allowing my YouTube channel (Torang Pe Channel) to cover KMA events but unfairly allow other YouTube channel to cover one KMA event.
3. Decided to cease my KMA Inc membership on 28 Nov 2020 committee meeting without relevant reason while the membership is not definitive. This is considered as a personal attack to me by some members of the committee to show some kind of "evil power" and "evil conduct" to exclude me as a Tou Minahasa, a Kawanua by definition.
I've never thought that the committee will do that to me and this is really disappointed. I have established this Incorporated from scratch in Nov 2018 and supported the Chairperson. However, what I had in return in the end was betrayal, disrespect and marginalisation.
I am praying for them to the Amang Kasuruan Wangko to forgive them because they do not for what they have done to me as a Tou Minahasa. I am in peace now by writing this. God make me peace.
These are the members who attended the meeting on Saturday 28 Nov 2020 at Roy Moniaga Sumampouw who agreed to cease my membership:
1. Bpk Lucky Kalonta (Penasehat)
2. Bpk Albert Lengkong (Penasehat)
3. Ibu Connie Rotinsulu (Ketua)
4. Bpk Adhianto Utomo (Sekertaris)
5. Ibu Sanya Patrick (Bendahara)
6. Ibu Sherly Mentang (Koor Spiritual)
7. Bpk Roy Moniaga (Koor Kolintang)
8. Ibu Merry Moniaga Sumampouw (Bid Kesenian)
I am challenging this decision and seeking justice. 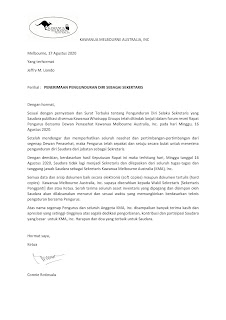 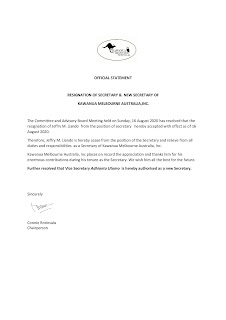 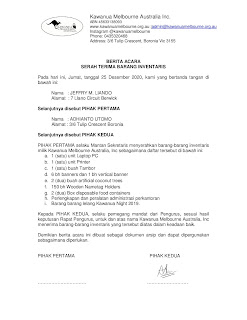 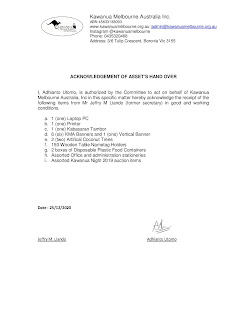 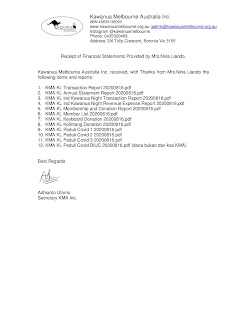 Email ThisBlogThis!Share to TwitterShare to FacebookShare to Pinterest
Home
Subscribe to: Posts (Atom)
This is a personal blog of Jeffry Liando as part of www.indo.nz. To go to the Kawanua Melbourne Australia Inc website, please click this link. For more info and knowledge about Minahasa, please visit www.minahasa.melbourne. 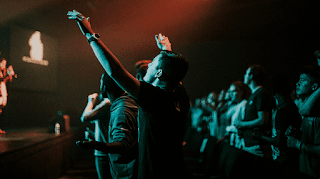